Low-code Predictions: On the Right Side of the Digital Tipping Point? 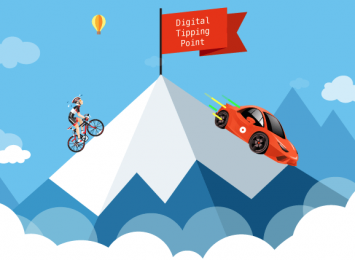 Three converging themes around low-code application development are creating a digital tipping point in the market. In May 2016, OutSystems CEO Paulo Rosado wrote about this convergence. There have been lots of new developments since that blog post. So, I decided to re-examine the themes to see how they are holding up and predict how they will hold up in 2017.

Theme 1: Mobile development is crippling – Building and delivering enterprise-grade mobile apps requires a complex set of technical skills and is an exercise in extreme change.

A good way to examine this theme is to look at two analyst reports that came out after the original post. In June 2016, Gartner released the Magic Quadrant for Mobile App Development Platforms (MADP) report. And then Forrester released their The Forrester Wave: Mobile Development Platforms, Q4 2016. Looking at both reports, it is clear we are witnessing a trend affecting the mobile development toolsets that have been dominating the space over the last few years. In both reports, low-code development platform vendors are taking on the established leaders.

Let’s take The Forrester Wave: Mobile Development Platforms as an example. The debut of OutSystems as a strong performer in this wave is a major shift. It confirms that mobile teams are willing to explore more productive development options beyond native coding. Here are some of my favorite quotes from the report:

“Customers we spoke with said they like how quickly they can build mobile apps on OutSystems. One customer cited a 30% to 60% reduction in time required to fully construct an experience.”*

“Some of them mentioned that their developers were a bit wary when introduced to a model-driven development tool, but after using it, they enjoyed building apps on it.”*

My 2017 prediction:  I predict that by the end of 2017, an increasing number of mobile apps will have been built with low-code platforms, but the platforms that will succeed will be the ones that make it easy for developers to build complex apps for the enterprise. The release of OutSystems 10 proves that, for the first time, a low-code development platform is capable of accelerating the development and deployment of the kinds of advanced mobile applications that previously required extensive hand-coding.

Theme 2: Expectations from business are accelerating – Disruptors are lurking around every corner and every company faces the threat of being “Uberized.”

You don’t have to look very far to see more companies being disrupted. Pick any geography, any vertical, any company size – there are no safe havens. I’m going to pick on retail because this segment has seen more than its fair share of disruption. Over the last few months we’ve seen household names struggle to either survive or reinvent themselves.
• Sports Authority: 460 stores shutting down
• Walmart: Closing 269 stores, including 154 U.S. locations
• Kmart/Sears: 78 stores closing
• Macy’s: 100 stores closing

Now look at the next wave of digital disruption that Gartner is predicting as we head into 2017. Here are some of my favorites from the list:
• By 2020, 100 million consumers will shop in augmented reality.
• Through 2019, every $1 enterprises invest in innovation will require an additional $7 in core execution.
• By 2022, IoT will save consumers and businesses $1 trillion a year in maintenance, services and consumables.

My 2017 prediction: Because disruption will be the new normal, look for disruption to become even more extreme, like apps that can be run from a person’s wrist. Or using a hologram of yourself to shop in several places simultaneously and even try on shoes and clothes. We love to see our customers embracing disruption and using it to differentiate and adopt a leading position. Check out this great case study from Allen Bros, an OutSystems customer disrupting the fruit production industry with IoT and mobility.

Theme 3: IT is hitting the productivity wall – Traditional tools and methodologies fall short in today’s digital era, effectively killing the days of the big-bang software project.

We hear about this theme in every customer conversation. Here are some case studies that were published since Paulo’s original post highlighting organizations that hit the productivity wall and adopted low-code to succeed:

Helping an Enterprise-Grade Naval Asset Management System Get Into Shipshape

As we consider these themes and the trends we are now observing, there is another very telling statement in Gartner’s MADP report:

My 2017 prediction:  For IT to be productive in the coming year, they will need to combine low-code and general purpose to meet the challenges associated with digital disruption. OutSystems really shines in this area.

From a digital tipping point perspective, perhaps thinking of it more like a seesaw is appropriate. When outweighed by your counterpart several times, the tipping point stops being a tipping point at all. In fact, whoever happens to be on the opposite end of the seesaw slides down to join you. I believe that what these latest reports and trends are showing us is that low-code development platforms are becoming the big kid on the playground and anybody on the other side of the seesaw will ultimately slide down to join us.

For more on this subject, you can check out our “greatest hits” research that we put into one bundle we’re calling 5 Essential Digital Tipping Point Resources.

An accomplished "IT Renaissance Man", Mike Hughes has worked in diverse roles from developer to business analyst, architect to project manager, account manager to sales manager. All this knowledge culminates in a single-minded focus on helping clients become their own IT success stories using OutSystems low-code platform.

An accomplished "IT Renaissance Man", Mike Hughes has worked in diverse roles from developer to business analyst, architect to project manager, account manager to sales manager. All this knowledge culminates in a single-minded focus on helping clients become their own IT success stories using OutSystems low-code platform.